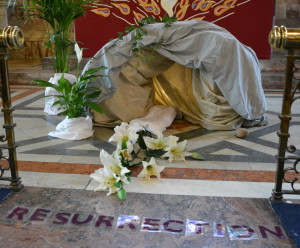 As joyful music plays, we all gather around the empty tomb, which is surrounded by plant and stones. Light is coming from within the tomb, folded white garments and lilies trace a path from it, and we see the word ‘Resurrection’.

Angels proclaimed the birth of Jesus, and after his death on the cross it was an angel who told the women that Jesus was alive. Do you think angels still visit us today?

Each year at Easter, many Christians build an empty tomb like this one in their churches.

After the Sabbath, Mary Magdalene and two other women set out at dawn to visit the tomb where Jesus had been laid. As they reached the entrance, they were startled by the dazzling figure of an angel, who said “Do not be afraid, for I know that you are looking for Jesus, who was crucified. He is not here. He has risen, just as he said. Come and see the place where he lay.”

Like the women, Christians look into the empty tomb to remember that Jesus, God’s son, was crucified, but after three days rose from the dead. they believe this is the greatest miracle the world has ever known. 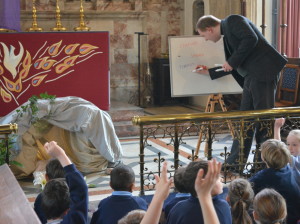 Jesus was put to death on a cross like a criminal, even though he had done nothing to deserve this awful punishment. But as we have heard, the Bible tells us that on the third day Jesus was raised to life once again, giving his followers the hope that  death is not the end of everything. In fact, in some ways it is just the beginning. 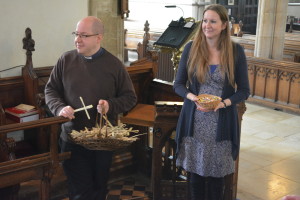 This is why we celebrate Easter by giving and receiving Easter eggs, a symbol of new life and hope for the future.