There’s no doubting that Rutland is a beautiful county. No doubting either that its villages contribute greatly to the overall canvas. And helping even more are the historic churches that often dominate the stone-built locales of quiet, laid-back living that is our heritage.

To learn more of the county’s delights, 27 Friends of All Saints set off on a very cold mid-April morning to enjoy super scenery – and discover the history and mystery of four Rutland churches. 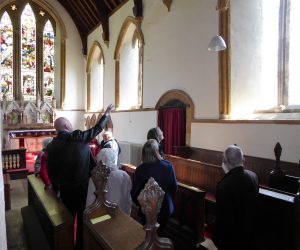 Our guide was Andrew Swift, an expert in all things to do with both the actual buildings themselves and how churches have evolved and developed over the centuries. He had travelled down from his home in Norfolk to share his specialist knowledge and proved a veritable encyclopaedia of information.

First stop was the village of North Luffenham, still a centre for the Ministry of Defence, though with brown jobs” rather than the one-time “brylcream boys”. Our target was the parish church of St John the Baptist.

Dating back to the 11th century there is much of interest here, including medieval wall paintings, fragments of 14th century stained glass, and carved angel figures decorating the roof, many of which still show traces of paint. There is a double sedilia set against the south wall of the chancel with a brass plaque to Archdeacon Robert Johnson, the 16th century churchman who founded both Uppingham and Oakham public schools. Like they did to so many churches in the UK, the Victorians brought an epidemic of change, adding their own versions of decorations and fitments. In 1870-71 and 1874-75 they stripped the walls of the plaster, removed the medieval screen and added fittings.

For all that, this is a really imposing church, with a chancel that seems every bit as long as the nave! 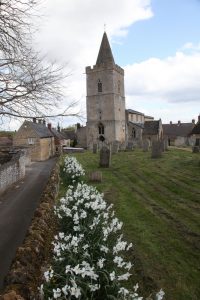 Next on our tour came the church of St Mary at Morcott, which dates back to the early Norman period. The church was re-built in the early 14th century and then, again, came the Victorians with more restorations and completing the building we see today. 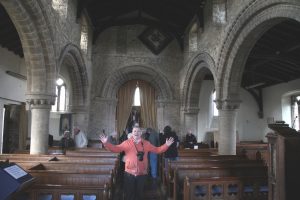 A fascinating carving on the chancel arch, depicts a pair of serpents swallowing each other’s tails while superbly carved arcade columns display a wonderful variety of decorations including human faces, geometric patterns, chevrons, a ram’s head and what Andrew Smith described as a “grotesque beast.” In the south aisle is the altar tomb of William de Overtoun (d. 1500). The Overtouns were lords of the manor for centuries, living at Morcott Hall, which was called Overtoun Hall until 1800. 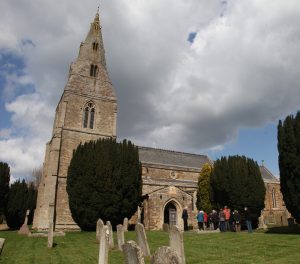 From Morcott to All Hallows at Seaton, a beautiful church set within a well-kept churchyard. 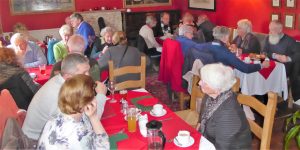 By this time our thoughts – and stomachs – had turned to thoughts of lunch and there, opposite the church, was the George and Dragon pub (a truly suitable destination for St George’s Day). There came even more suitability when a local team of Morris Men descended on the pub and, on the road outside, performed dances and a play. 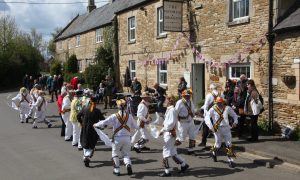 After the performance – back to church-gazing and the super Norman chancel arch and a truly beautiful Victorian alabaster altar decoration (reredos). The parish clock was installed after the end of WWI and forms the parish war memorial, funded by the public.

Our final call was the church of St Peter and Paul at Preston, a quiet village of some 180 people, two miles north of Uppingham.

The church is a delight. Its fine Norman arches, beautiful chancel and many interesting features make it really worth a visit. There are two pieces of mosaic pavement from the 5th century church of St John the Baptist in Constantinople and another from the church of St Sophia at Nicaea.

Cypress trees outside the church were grown from seed collected from the Garden of Gethsemane.

The afternoon sun lighting up the chancel through the southern windows was a truly memorable sight, enabling us to enjoy this beautiful church at its peaceful best.

And so, our tour of the churches, organised by Beryl Kirtland, had come to an end. A thoroughly enjoyable trip through Rutland’s best with memories of beautiful settings, fine buildings and those quiet, laid-back villages.

Colin Collins, Member of The Friends