We have just returned from a holiday in Sicily. We flew into Palermo by the kind offices of the no frills Irish Airline. It was dark. Our transport collected us and we set off westwards. Our villa (sounds so grand) was in the hills near Castellammare del Golfo. The drive up to the villa changed from a gentle slope to a steep gradient where the car needed to charge up like a cat out of the bag. The sound of acceleration was really exciting.

The town of Castellammare was a touristy place. There was a small marine, where the boats were mostly ribs. (I had to ask as well – it means they have an engine rather than sail.) To sit beside the water in the morning having breakfast of orange juice and croissants was bliss.

One day we travelled to Erice, perched on the top of Monte San Guiliano. It has very ancient origins and is laid out in a triangular plan. The town has preserved its medieval character with fme city walls, paved streets, stone houses, small squares and numerous churches. That day the clouds were below rather than above us. It was a weird but exciting feeling. At San Pietro we watched a wedding party arriving in their fmery and the women wearing stilts; the heels were so high and the street was cobbled. It was such a beautiful place. 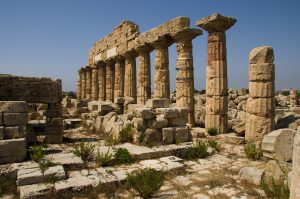 One of the places we explored was Selinunte, and it was a shock to see the Acropolis there. It was covered in scaffolding as the ruins are being strengthened. It used to be surrounded by colossal stone walls 3 metres high, with two gates, the larger one on the north side. This area contained the public buildings and temples all facing east. From the southern end are the space ruins of Temples; there were about 7 of them.

We loved exploring and finding differences in places and people: the streets of Trapani on a Saturday evening, with pedestrians meeting and greeting their friends. We could always eat outside, and the restaurants were different and exciting.

Having Italian speakers meant we could really be part of the scene. Some of the churches we visited were just beautiful. On Saturday evening we found the church full, with the Mass for Sunday on the Saturday evening. I do not think that will be adopted by Oakham team as yet. The comforting thing about holidays is that people are basically the same, with the same hopes and fears and the security of family all enclosed in the blanket of our faith.