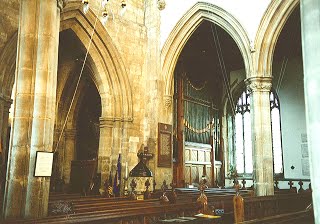 The former organ at All Saints was built by Messrs Brindley & Foster of Sheffield in 1872 and located in the Lady Chapel (on the south side). Following extensive alterations in 1896 it lasted until the 1990s, and that despite being described as long ago as 1934 as ‘ridiculously out of date and … unworthy of the church’.

However, in 1937 Yates improved and electrified the organ which was moved to the north west corner of the Church, although the console was placed in the Trinity Chapel some distance to be near the choir. The organ was removed in 1994. 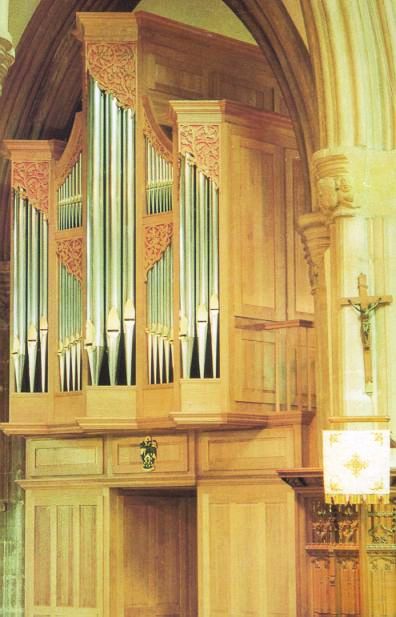 The new organ, which occupies the arch of the Trinity Chapel, was built by Kenneth Tickell of Northampton and installed in 1995. The case is made of solid English oak and is decorated by the Rutland coat-of-arms.

The Great Organ speaks through the west case into the nave, and consequently sounds louder there than at the console, and the pipework in the west case is from the Great Open Diapason (although the smallest pipes are dummies).

The Swell Organ is on the east side, and has two separate sets of shutters controlling the sound in nave and the Trinity chapel. The pipework in the east case is the Pedal Principal (which therefore sound disproportionately loud at the console), while the rest of the Pedal Organ is located on the north side of the organ.

In 2018 the piston system on the organ was upgraded.  Realising that the piston system was rather limited compared to more modern systems, the number of both general and divisional pistons was increased from 5 to 6. Also the number of multi level memories was increased to 96 for general pistons and 16 for divisional pistons. A stepper function with  ‘previous’ and ‘next’ pistons was also included.

Further details of the old organ can be found on the National Pipe Organ Register as surveyed in 1938 and 1984, and of the new organ surveyed in 2003.

Organ recitals take place on Bank Holiday Mondays at 11:15 am.

Specification of the current organ