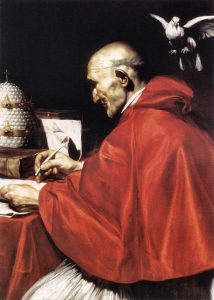 Gregory was born in 540, the son of a Roman senator. As a young man he pursued a governmental career, and in 573 was made Prefect of the city of Rome. Following the death of his father, he resigned his office, sold his inheritance, and became a monk. In 579 he was sent by the Pope to Constantinople to be his representative to the Patriarch. He returned to Rome in 586, and was himself elected Pope in 590. At a time of political turmoil, Gregory proved an astute administrator and diplomat, securing peace with the Lombards. He initiated the mission to England, sending Augustine and forty monks from his own monastery to refound the English Church. His writings were pastorally oriented. His spirituality was animated by a dynamic of love and desire for God. Indeed, he is sometimes called the ‘Doctor of desire’. For Gregory, desire was a metaphor for the journey into God. As Pope, he styled himself ‘Servant of the servants of God’ — a title which typified both his personality and ministry. He died in 604.